The athletic program at DSHA offers our young women an opportunity to develop beyond the classroom, developing their God-given gifts in a variety of ways. The values of teamwork, discipline, and character are exercised as regularly as any group of muscles as our Dashers put themselves to the test for the sake of their teams, their school, and themselves. Athletes learn to organize their time and balance a busy lifestyle of academics, athletics, and co-curriculars.

We are proud to tell you that over 60% of our students participate in interscholastic sports each year. Seventy-two percent of our student athletes have been recognized by the National Interscholastic Athletic Administrators Association as Scholar Athletes because they have achieved a cumulative GPA of 3.0 or better. 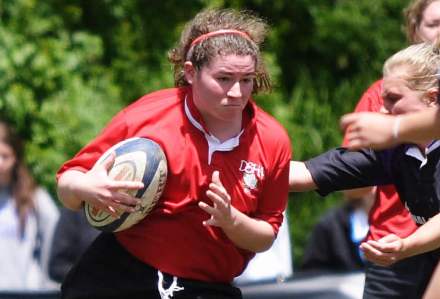 May 21, 2009 – Divine Savior Holy Angels are girls U19 national champions once again.

The finals have rarely been easy, as their 19-14 score over Lakewood this year attests.

Of course, this year it was tough all the way. Summit almost upended DSHA in the quarterfinals 10-8, in a game the Colorado team left feeling they could well have won.

“It was an unbelievably competitive weekend,” said DSHA head coach John Klein. “Our first game against Summit was our closest. They played a well-coached system of rugby. We were able to get through the battle and found a way to win.”

Klein and Summit coach Karl Barth know each other well.

“I’ve known Karl Barth for 10-11 years now. We’ve travelled across the country to play each other on more than one occasion,” said Klein. “He had a great team, a great group of players. What won it? We hit a few big plays that carried us over; we were more successful with our open-field play. We played great defense - they must have had more possession than we had - but we were able to keep grinding it out. “ 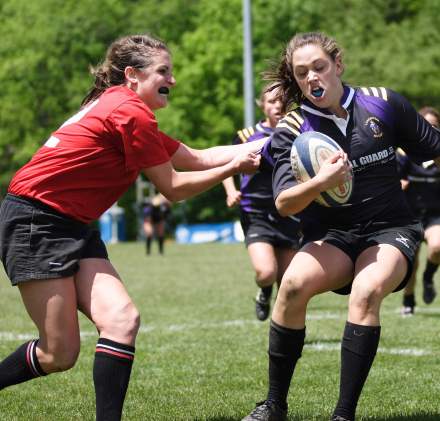 DSHA won it with two tries - Lauren F. on the wing after the ball runs through the hands, and then fullback and tournament MVP Sarah C.“made a lot of people miss her,” after lineout ball worked its way down to the fullback inserting into the line.

Despite being favorites, the DSHA players knew they were going to be tested. The seeding was based on the West RFU’s performance last year, but that 8th-place finish was an anomaly.

“We were expecting this game against Summit, and knew it wasn’t the traditional first round game,” Klein said. “We knew where there top players were, knew what to expect. However, we came out flat and didn’t play our best game. We were nervous.”

Against Maryville, Klein said, his team rebounded. “Maryville had a lot of talent. Their flyhalf and centers are all U20 Eagles. We knew we wanted to stop them in the middle. If the rest of the team got us, then they deserved the victory. We have great midfielders ourselves, and we were able to control them. The flankers were really laying it out there too and made some great tackles. Maryville also had strong wingers and a pretty good pack; but we were stronger.”

Centers and senior Megan F. scored a try and converted one, and Franzen, who had missed almost the entire season with a PCL injury and was playing on borrowed time, and knees, ran in two in the 17-5 victory.

But the team also suffered a blow as openside Kathryn J. was taken off the field with a concussion.

“That night, we were all shaken because of Kathryn J., who was able to return to us at the hotel, but not for Sunday [play],” said Klein. “We did know who we were playing though – Lakewood, who we played two weeks prior at the Midwest Championship. We won that match 22-8 and played some great rugby then. I was hoping we’d repeat, but we really need other people to step up to the plate.”

“I’ve always talked of her capability and she finally stepped up,” said Klein. “She was all over the field, really making a lot of tackles.”

Anna L. replaced Emma at lock and was a force in the lineouts.

DSHA has three captains, and by the end of the final only center Sarah M. was left on the field. Lauren’s tournament was over as her knee cried uncle. Ellie M., a sophomore, stepped in for Lauren  and immediately scored a try.

“And Chimmy,” Klein said of Sarah C. “I can’t say enough about her. She had two tries in the final. She’s just phenomenal.”

The seniors who ended that 19-14 win never lost a game. DSHA hasn’t been beaten since October of 2003, “and the great thing is that they haven’t been all blowout games,” said Klein. “Our girls refuse to lose and find a way to win. A great tribute to them; they’re unbelievably tough.

“It’s humbling to be part of all this. You never think that you’re going to accomplish anything like this. To have them do what they do day to day, it’s indescribable. Six championships in a row.”

Highland, so dominant in the boys game, never won more than five in a row.

“To do something that hasn’t been done,” said Klein. “I’m just so proud of them.”

For information about this site or to schedule a game please contact Coach John "Chin" Klein at chinnychinchin_2000@yahoo.com with any questions. Thank you for visiting our website.©2012